Pace is a leading Human Resource Solutions provider offering practical long term solutions to clients in the areas of Recruitment -Permanent Staffing, Contract Staffing & Outsourcing. We are a premier provider of senior-level Executive search and leadership consulting services. Our success stems from sourcing the very best to work for our clients. Our goal is to provide a service that places our client’s needs and our candidate’s careers above everything else.

Pace’s executive recruiters are skilled in the assessment of the executive employment market and provide you with the most qualified candidates. We help recruit the best executive talent in the market. PACE recruiters conduct executive and mid-level management searches both locally and nationwide and across industry verticals. We remain focused and updated on the new hiring methodologies to suit the ever changing situations and requirements in the market.

Is there a return on investment (ROI)

Outsourcing all or parts of the recruitment process to a recruiting partner means you need to trust that the partner will deliver on their promise to find you the right hire. Working with a professional agency like Pace with years of experience in the field will help you save a lot of time and effort. The committed team will ensure that there is an enhanced quality of new hires.

…because the World Needs Great Leaders!!!!

At PACE Global HR Consulting Services, we know what great leaders can achieve. We empower our clients to drive positive changes through effective leadership. Each search engagement is customized to the specific objectives and dynamics of your needs. It is almost impossible for an organization to recover from the mismanagement that comes with poor leadership . There is always an overwhelming pressure to find leaders who have the skills and experience necessary to succeed, who are able to define and advance corporate strategy and simply fit in with the organizational culture. Our executive search services identify these unique leaders, determine their ideal organizational fit and subsequently build appropriate frameworks for their compensation and retention.

Success is not simply the placement but rather the long-term business impact a great leader can bring about. Pace’s commitment to the client does not end when we place a candidate. It helps create a favorable environment within the organization to ensure optimum results . As the journey continues, we help to unlock the potential in individuals with proper team management. An executive search is carried out to find candidates who are suitable for senior executive roles. Executive search is very different from regular recruitment because a large amount of money and time goes into such recruitments. A recruiter who is doing an executive search is expected to pre-assess & screen candidates. This is done to ensure that only high-quality candidates get to meet the client.

Talent is always in high demand. As we enter a new era of work, talent acquisition, talent recruitment, and talent retention have become a priority for every business. To handle the evolving needs of the hiring manager and facilitate a shift in focus to skills over more traditional role-filling, new team structures have been set up. Their focus is on creating talent management strategies to attract people with the requisite skills to drive their organizations into the future. These teams combine many of the core competencies of human resources: talent recruiters, talent acquisition specialists, talent acquisition recruiter, hiring managers, and HR professionals. They are responsible for the entire talent management process from sourcing, interviewing, hiring and finally onboarding the successful candidates.

Temporary staffing can lead to cost savings and enhanced productivity for your organization. A leading temporary agency, PACE combines working with partners and providing a single window with the human touch to save costs, enhance quality, and maximize efficiency of your business. Embrace flexibility, business freedom and fewer hassles with our excellent contract staffing services.

A professional placement service will ease the hiring steps by saving important human hours of the company’s staff in direct candidate selection. Placement consultants are better than direct recruitment by the company as they have the expertise to scrutinize and select the right candidate. Having experience makes them well aware of client behavior and requirements.  The agency also authenticates the documents of the job seeker to achieve clarity. It is also a great practice for a company to draft a demand for employees in a particular specialization.  The consultant identifies the needs of the client based on the draft and makes the best candidate available for a particular job.  Professional recruiters fast track candidate applications and present the right one for the right job position in record time.

Temporary or contract employment allows one to choose when and where to work. Contract assignments can be as short as one day or as long as several years. In today’s competitive business environment, employers are increasingly turning to contract staffing for special projects, workload fluctuations, and staff shortages. As a result, contract placement is becoming a popular career option for many professionals. Either of the employment options—contract or contract to hire, allows one to be choosy about what work projects appeal, how fast to advance the career and what work schedule will fit ideally for an individual.

HR Staffing is the function of employee recruitment, screening and selections performed within an organization/business to fill job openings. Other areas of employment which may be handled by a staffing department are orientation, training, retention and termination. PACE offers HR staffing services for short, mid and long durations handled by experienced HR professionals.

Management level talent constitutes a major segment of an organization’s workforce. We facilitate in identifying and routing this talent to our clients. Once we understand your specific requirements we source and screen the candidates most suited to your needs and schedules. We also assist in employment and reference checks, degree/certificate validations, salary negotiations and post-offer follow ups.

An inclination towards flexible work is being driven by factors such as freedom, technology up gradation, skill focus, additional income and human capital. Gig economy allows task ownership, convenience and flexibility. Gig economy can be defined as a work engagement where on one side, there is a service seeker i.e. a consumer with a demand for a specific task and on the other side, there is a service provider i.e. a gig worker who can perform that specific task within a stipulated time frame. In this economy, tech-enabled platforms connect the consumer to the gig worker to hire services on a short-term/long term basis. Gig workers include self-employed, freelancers, independent contributors and part-time workers. This project-based gig economy allows the service adopter to cut overhead costs, and the gig worker to get paid for the specific task performed instead of receiving a fixed salary. Thus, a shift from a full time 9-to-5 job to an on-demand, freelance and task-based economy is termed as gig economy. PACE offers this service across various experiences , skills, competencies and industry verticals.

The success of a specialist recruitment agency is achieved by a combination of effective job search strategies and innovative recruiting methods. However, a partnership cannot be effective unless you have one defining factor – trust. Trust is a critical component in today’s business environment. In fact, it is the foundation for developing strong and sustainable partnerships.

In today’s job market where professionals discover information about an employer on social media, employer branding is crucial. When you form a partnership with a specialist recruiter, you must trust that they will provide potential candidates with a positive candidate experience, accurate information and realistic expectations on what it’s like working for your company thereby becoming excellent brand ambassadors on their own.

The ability to attract and retain great talent is critical for achieving business goals. That’s why today’s smartest companies are applying proven resources and best practices to ensure they secure the talent they need quickly and cost-effectively. PACE Global HR Consulting Services can provide the best-in-class staffing and recruiting support you need to find the people who will drive your organization’s growth and success

Providing HR resources on Staffing for Recruitments, HR, and Trainers.

Any cookies that may not be particularly necessary for the website to function and is used specifically to collect user personal data via analytics, ads, other embedded contents are termed as non-necessary cookies. It is mandatory to procure user consent prior to running these cookies on your website.

Good people management is essential for the success of a business.

PACE GLOBAL HR CONSULTING is an innovative HR consulting firm with a decade of experience offering various HR services that focus on improved efficiency and effectiveness in order to deliver better business results. PACE helps organizations maximize the potential of every employee thereby aiding business growth and in the process aligning the HR strategy to the organizational strategy. It helps Corporations effectively manage the ever growing complexities in the HR domain by utilizing their Human Capital in the best possible way. Having worked across different industry verticals and various geographies PACE brings to you an innovative HR approach based on experiential learning, global practices and benchmarks.

Putting People at the core of Your Strategic Business Plan:

Leadership teams are now focusing on people - strategy as an integral part of their business planning process. Organizations are re-formulating their plans to align with their workforce needs, knowing that their most important competitive advantage is the ability to attract and retain the right people.

Alignment between an organization and its employees doesn’t come naturally -- it takes dedication, strategic planning, timely implementation and effective communication. The focus should be on employee role, Goal, Team and Organizational alignment. Pace envisages your needs and helps you get aligned through innovative methodologies & facilitates transformation with speed and scale.

Pace defines short and long-term talent needs and develops a robust model for achieving them. It is supported by HR systems and processes that are aligned to driving and implementing a performance driven culture. Pace understands the importance of mobilizing the workforce with new re-skilling strategies to boost productivity and long-term growth.

Pace applies human-centered design thinking and digital tools in getting to grips HR analytics, HR technology, HR Information systems & gaming assessments to reinvent HR and create the ideal experience for both the internal and external workforce especially the millennial, now the largest generation in the workplace. We champion the bold to achieve the extraordinary. 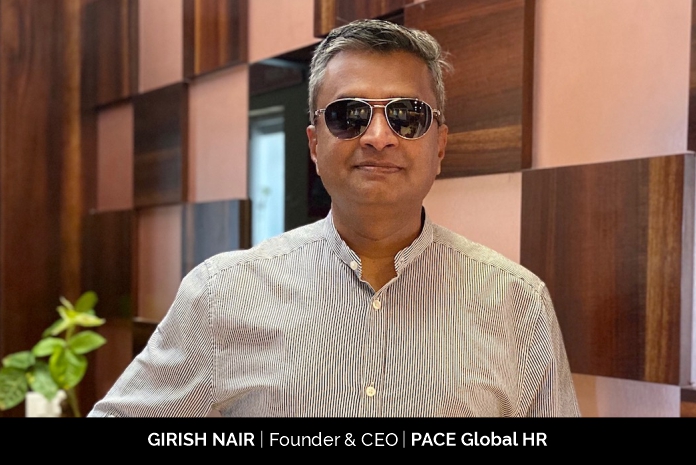 Creating A New Era Of Enriched HR Services Through Outsourcing

The Matrix of Human Resource Competency, Efficiency and Performance